MyCelx technology is being employed at an Oil Company’s Sydney site to remove hydrocarbon contamination from groundwater. The Sydney site has employed a MyCelx MX7 cartridge housing with 7 MyCelx filters as a targeted element of a larger groundwater remediation system.All organisations have a responsibility to avoid environmental pollution, however where pollution has occurred in the past – in this case groundwater contamination with hydrocarbons – the site organisation has a responsibility to rectify that pollutant situation through groundwater remediation and future control measures.

As with many established service station sites, this Sydney site had significant difficulties relating to groundwater contamination, the result of a tank failure that previously contained two-stroke fuel. The challenge is to conduct groundwater treatment activities to ensure that groundwater quality meets legislative guidelines and requirements for demonstrated due diligence, whilst still allowing the site to operate.In these circumstances, the need for effective and efficient methods of groundwater remediation meant that the MyCelx filter cartridge system would be able to meet the requirements of the client. Furthermore, employment of the system has afforded evidence of the value of the MyCelx technology when presenting the case to the New South Wales Environment Protection Authority in an attempt to gain acceptance of the system.

The groundwater treatment project at the oil company’s Sydney site incorporated MyCelx Filters within a broader remediation system to ensure the superior performance of the entire system.An existing interception trench collected groundwater, an helical rotor pump pumped water to a collection tank. The existing helical rotor pump and level control on site was reused. The contaminated water was passed through a coalescing plate separator with high surface area vs. flow rate to conduct preliminary removal of oil and solid contaminants. The cleaned water was then passed through a 7 cartridge 10-micron sediment pre filtration filter before being polished with a seven-cartridge MyCelx Filter system (MXH-7). Refer to Figure 1 for a schematic diagram of the employed system.This process then allowed for safe discharge of the polished water to sewer, well in accordance with the guidelines and stipulations of the Sydney Water Authority. Further results indicated that the polished water would also be safe to discharge to drain, reuse or reinject where possible.Please see below for a schematic drawing of the employed system design. 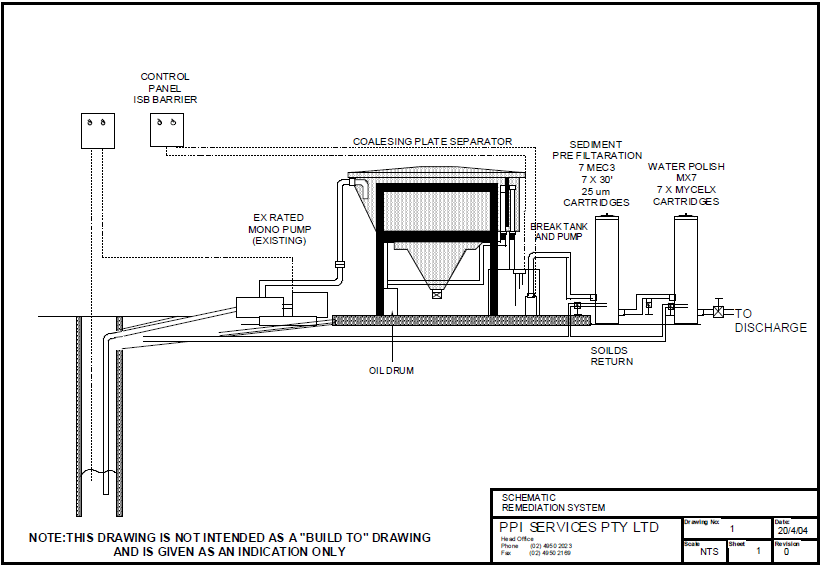 Analysis was undertaken of the levels of various target contaminants remaining in the treated water. These target contaminants included: Total Petroleum Hydrocarbons – (TPH), Benzene, Toluene, Ethyl benzene & Xylene (BTEX), Metals Suite (Arsenic, Cadmium, Chromium, Copper, Nickel, Lead, Zinc, Iron) Total Metals by ICP-AES and Total Suspended Solids.Samples were taken at the discharge side of the pump drawing from the interception trench and from the discharge of the MyCelx filter housing. A comparison of analysis results gained from samples taken before treatment and samples taken after treatment are included below. It is noteworthy that reported levels of all analytes fell below the reported levels of initial samples taken prior to treatment. It should also be noted that all target contaminants were measured after treatment at levels in accordance with stipulated guidelines as detailed both by the New South Wales Environment Protection Authority and Sydney Water Authority for safe discharge to sewer and environment, with the exception of Benzene.Comparison of Analysis Results Before and After Treatment 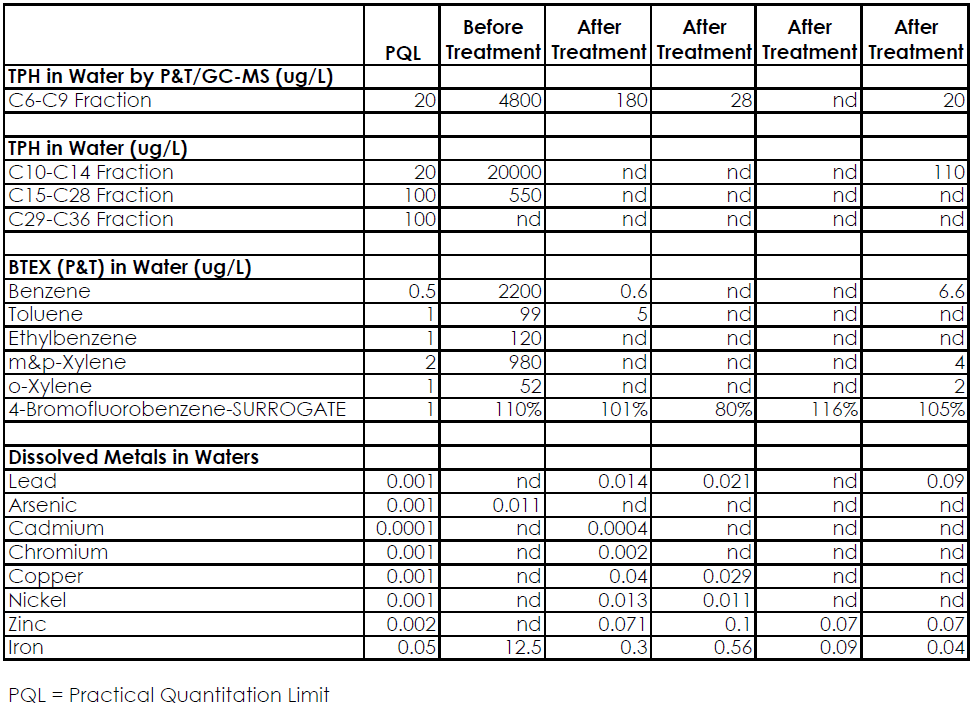 Oil companies face significant social and legislative pressure to adhere to authoritative guidelines and demonstrate responsible environmental management. The use of MyCelx filtration technology within this broader groundwater remediation system has allowed the company in question to demonstrate to all interested parties that they are exploring new opportunities and technologies to ensure they continue to improve environmental performance. The company has also incurred cost benefits by employing MyCelx filtration technology by avoiding the need to employ other less cost competitive technologies such as activated carbon.