This is the third article in a three-part series considering the challenges PFAS (per or poly fluorinated alkyl substances) present to the environment and potential solutions.

Most short-term acute generation of PFAS is from the use of AFFF (aqueous fluorinated firefighting foam) in firefighting exercises and responses. More chronic and gradual long-term generation occurs from decomposition of polymeric fluoropolymers like Teflon, leaching of fluorinated additives like surfactants and plasticizers, and release of fluorinated industrial solvents.

The Aqueous Fluorinated Firefighting Foam (AFFF), when applied to a fire, forms a foam blanket above the surface water. Of particular interest, an oil emulsion in the water, resulting from the AFFF mixing with residual fuel source, which may be any combination of, for example, oil, petrol, JetA1, Avtur, etc. The fuel/water/AFFF emulsion is very stable and does not phase separate, even if allowed to stand in a holding pond for an extended period of weeks. Thus, treatment of the contaminated water must allow for, and be capable of, treating free oil and hydrocarbons, emulsified and soluble oil, and then, finally, PFAS.

The purpose of using fluorosurfactants the PFAS firefighting foams  is to reduce the water/oil interface surface tension so that the foam can flow easily and increase foam penetration.

PFAS contaminated water is most commonly treated by adsorption through the use granular activated carbon (GAC) and/or ion exchange (IX) resins. Such an approach is advantageous due to the low cost of deployment and ease of set up at point of entry.

Regeneration of absorbent media such as Ion Exchange Resin, whilst attractive for increasing service life, also has a downside as the concentrated PFAS waste brine solution must then be contained and transported to a suitably qualified waste treatment site for PFAS.

The adsorption media most commonly applied today for PFAS removal was not designed for such specific use; hence, media is readily subjected to fouling, which greatly reduces efficiency. Drawbacks of such an approach include inefficiency (frequent replacement required), limited range (often requires combination with additional treatment option such as reverse osmosis), and different size PFAS chains vary with respect to water solubility (smaller chains are more water soluble, thus, less affinity for binding agents).

The use of adsorbents in PFAS remediation is problematic because PFASs easily desorb in the presence of other organic compounds with higher affinity for the adsorbent. Due to the low tendency of PFAS to undergo usual weak attractions (i.e., van der Waals forces), they are easily displaced by other organic impurities which may be present. This results in a very unfavorable adsorption/desorption isotherm, requiring the use of large amounts of adsorbent in the absence of effective pre-filtration.

Another downside to deployment of adsorption media is the abundant generation of waste both sludge and solid. Such solid waste is typically treated via combustion (it’s important to ensure complete destruction, which often requires temperatures above 1200 C), sludge is a more difficult and costly waste item to transport and then treat.

Regeneration of absorbent media such as Ion Exchange Resin, whilst attractive for increasing service life, also has a downside as the concentrated PFAS waste brine solution must then be contained and transported to a suitably qualified waste treatment site for PFAS.

MyCelx filtering media cartridges are hydrophobic, after filtering PFAS from the water the cartridges are safely handled, stored and transported as a dry waste, preferably disposed of by thermal destruction (small volume with proportionally low cost) with no lingering or contingent liability often associated with burial.

The search for an in-situ approach is ongoing. Researchers have demonstrated generation of hydroxyl radicals, as well as persulfate radicals in water can be employed to destroy longer-chain PFAS. The problem is incomplete destruction leading to smaller, shorter-chain PFAS daughter products.

PFAS does offer some specific characteristics that can be taken advantage of, in theory. By taking advantage of chemical properties such as partial positive charges on Carbon atoms along with partial negative charges on Fluorine atoms, nucleophilic reactions offer promising potential. In fact, hydroperoxide and superoxide radicals have been shown to destroy PFOA with no detectable shorter-chain PFAS; however, the problem becomes the slow rate of reaction, which is typical of a nucleophile reaction.

The conclusion of this case showed that on-site treatment was possible with small footprint MyCelx plant within the OLEOLOGY container, lower cost and discharge that consistently was below the water utility’s requirement for discharge to sewer.

Bioremediation is unlikely to be a feasible approach because of the bond energy associated with the carbon fluorine bond, which exceeds the energy available even from known coupled enzyme-mediated reactions in cells.

Conventional water treatment plants that rely upon use of GAC and IX resin, incorporated for removal of PFAS, cope only for a short period of water treatment before breakthrough occurs. The residual hydrocarbon in the groundwater quickly overloads the GAC, saturates and breaks through the GAC and IX, leading to premature failure of the PFAS water polishing.

Some in-field operational cases where problems were identified after the installation of the PFAS upgrade equipment are highlighted in the cases below: 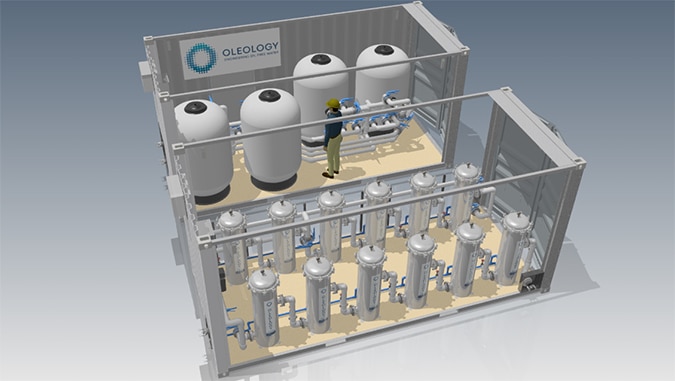 OLEOLOGY PFAS plant small footprint. In the foreground is MyCelx primary filtering, with MyCelx polishers in the second (back) container. OLEOLOGY

OLEOLOGY employs the “onion” analogy to describe the process; in order to get to the PFAS contaminants, which are the smallest volume in the centre of the onion, the larger outer layers of the onion must be sequentially removed.

The company chose OLEOLOGY containerized plant with MyCelx filtering and MyCelx polishing, and made a submission to the water utility to discharge at <0.0005 ug/L (or <0.5ppt). The system selected for treatment of the water required a robust method to remove suspended solids of an oily nature, emulsified oily water with foam/surfactants and high levels of dissolved metals and carbon. Truck away and treat was an impediment to site operations and, also was not viable at a price point of $4.00 per gal. The solution was to employ a container system to treat and discharge at site. The regulator commended the discharge quality of the water and cost including mobilization, hire, treatment, waste and demobilisation was less than 10 cents/gal.

The conclusion of this case showed that on-site treatment was possible with small footprint MyCelx plant within the OLEOLOGY container, lower cost and discharge that consistently was below the water utility’s requirement for discharge to sewer.

Paul Callaghan is founder and director of OLEOLOGY, a provider of engineered solutions for oil-free water. He has been involved in the oil & gas water industry for more than 33 years. His depth of knowledge results from a career in the oil industry, followed by engineering development of water treatment technologies. Since 2006, Callaghan has been developing solutions for the removal of hydrocarbon and PFAS from fire training installations. He can be reached at pcallaghan@oleology.com.au or +61 1300.692.359.

Jimmy Seow, Ph.D., is director of Environ Pty Ltd., Australia. Dr. Seow is a recognized PFAS subject matter expert and a member of the U.S. Green Science Policy Institute’s PFAS subject matter experts’ group, consisting of members from the United States, Canada, United Kingdom, and the European Union. Dr. Seow has also published several papers and reports on PFAS and firefighting foam and presented on PFAS and firefighting foam at various forums in Australia and internationally. Dr. Seow can be reached at jimmyseow@environwa.com.au or +61 4328.75807.

Hal Alper, president and chief science officer for MYCELX Technologies, is an inventor of chemistries and chemical processes. He has developed numerous industrial products, formulations and compositions currently in use and has been granted approximately 100 patents. He belongs to various distinguished professional societies and has published numerous articles on a variety of scientific and engineering topics. Alper’s primary interest is ecosystem preservation through industrial evolution. He can be reached at alperh@mycelx.com or +1 770.534.3118.

Patrick Laine received his doctorate degree in Earth & Atmospheric Sciences from Georgia Tech in 2011. Following receipt of his doctorate, he accepted a post-doctoral fellowship at University of Houston to study mercury cycling in the Houston area. Since then his career has been focused on environmental contamination, such as mercury as well as PFAS. He currently serves as the PFAS business development lead for MYCELX. He can be reached at plaine@mycelx.com.