Blog - Latest News
You are here: Home / Water Contamination / MARK RUFFALO TELLS EUROPEANS ON THE ENVIRONMENT: “YOU GUYS ARE THE HEROES N... 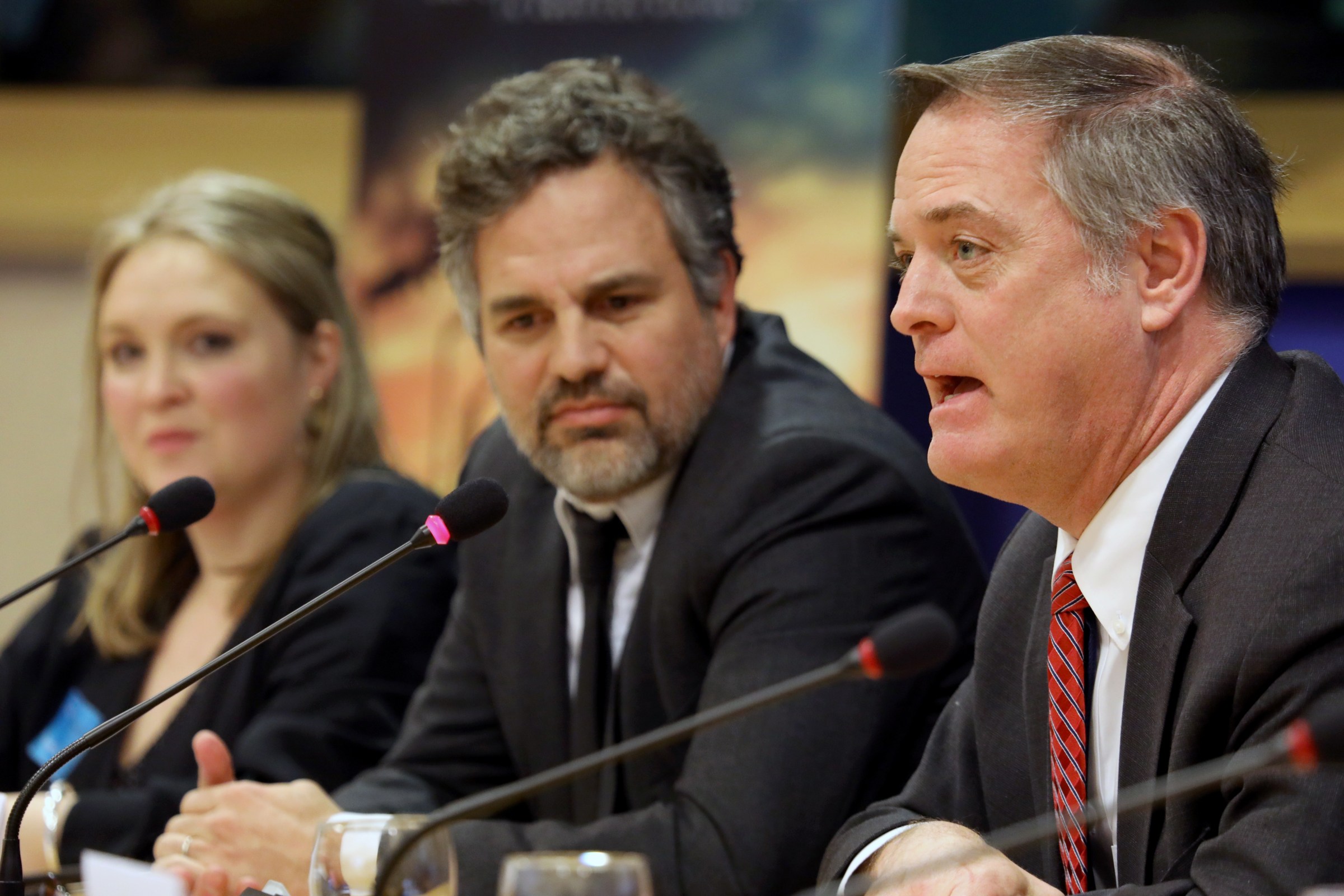 Hollywood superstar Mark Ruffalo spoke in Brussels today about his new film Dark Waters, which depicts the lengthy legal battle against a US corporation which polluted the environment with toxic “forever chemicals” for decades.

At the European Parliament today, Hollywood superstar and prominent activist Mark Ruffalo spoke about his critically acclaimed, hard-hitting new film Dark Waters chronicling the decades-long cover up of the health and environmental consequences of Dupont’s dumping of the toxic chemical C8 (which it used in the manufacturing of Teflon) into the local water supply.

C8, which refers to the chain of eight carbon molecules which make up its core, is another name for perfluorooctanoic acid, or PFOA. It is often referred to as a “forever chemical” because it does not break down and can stay present in the environment for centuries. C8’s presence in drinking water has been linked to numerous diseases, including a number of cancers and thyroid disease. 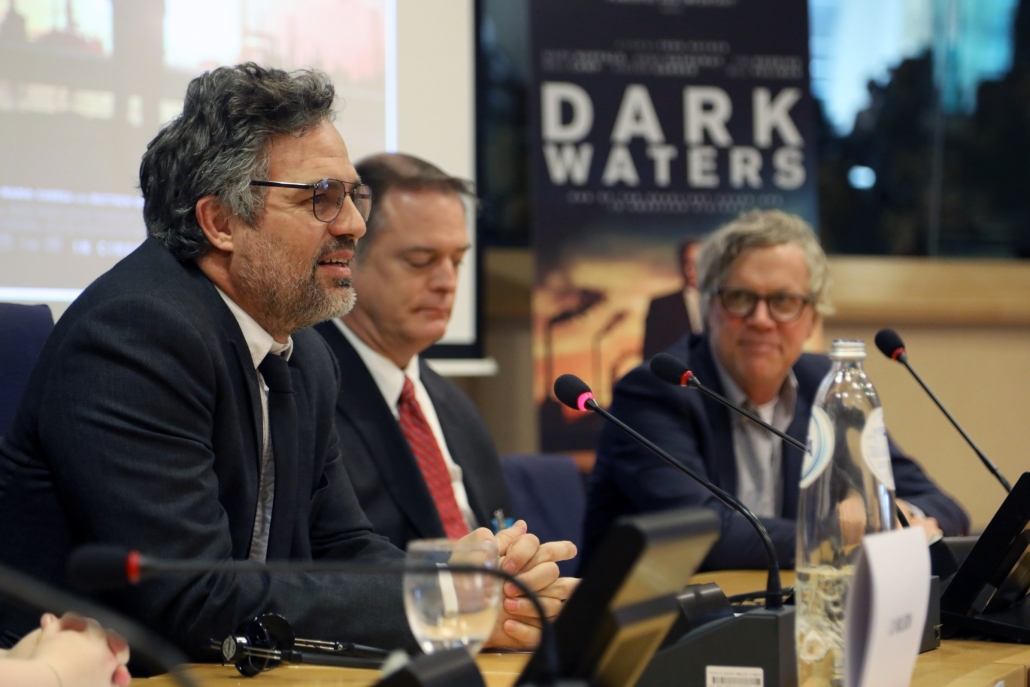 C8 is part of a broader group of thousands of synthetic chemicals known as polyfluorinated alkyl substances (PFAS), which are widely used because of their oil and water repellency, not to mention their temperature and chemical resistance, but carry numerous health and environmental risks.

“Sometimes we make a movie for the sheer enjoyment and pleasure of audiences. And sometimes if you’re lucky in your career it is a public service,” Ruffalo told the parliament. ” This movie I felt really hit all those places… Not one person who sees this film doesn’t go home and throw away their teflon.”

With America paralysed by the Trump administration and its loosening of environmental standards, Ruffalo had a message for European citizens, civil society and politicians: “You guys are the heroes now… People standing up and speaking out can make a difference. The more people who can do that and have their voices heard, the better we all are. There is enormous power in organising.”

Ruffalo was joined by the film’s director Tod Haynes and the lawyer who went up against Dupont whom Ruffalo portrays, Robert Bilott.

“This is a moving event. To be able to see this discussion occuring is not something I thought I’d see,” confessed Bilott. “We’re talking about something that is really an unprecedented global contamination, that affects all of us… and our children are born pre-polluted. It’s incredibly comforting to know that this is being discussed here now.” 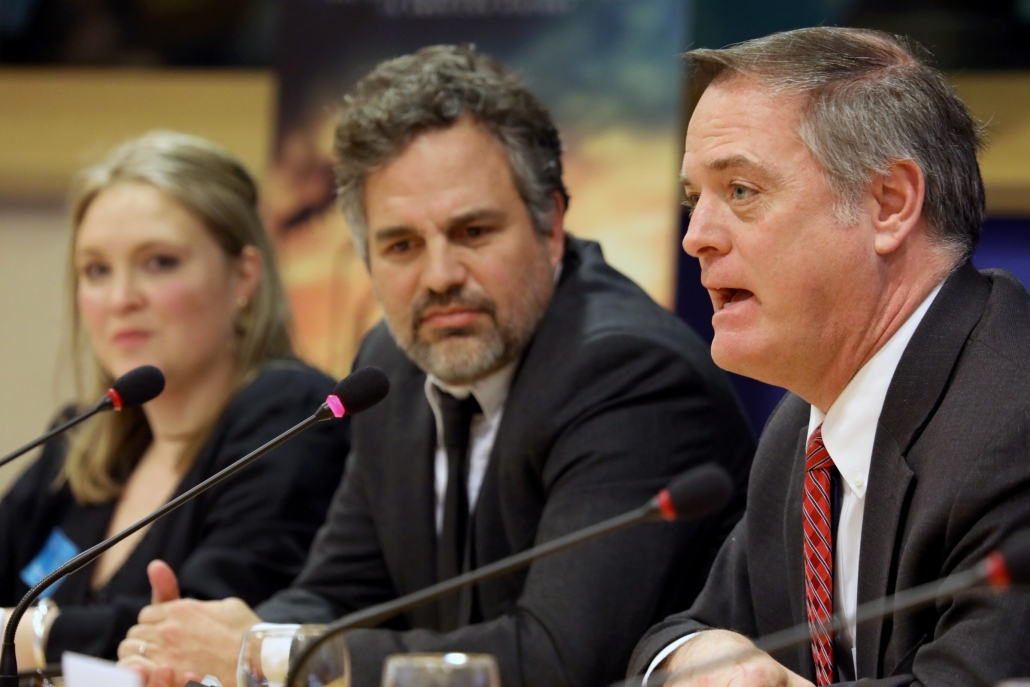 PFASs are present in the bloodstream of almost every human in the world.

“Pollution of chemicals isn’t a matter of minor inconvenience. It is literally a matter of life and death,” Sinkevičius said. “If we don’t act now, concentrations in the environment are bound to increase.”

Although Dark Waters deals with the specific issue of C8 contamination around Dupont’s plant in West Virginia, the situation the film depicts is, unfortunately, far from isolated or unique. Despite Europe’s generally tougher chemicals and environmental regulations, similar examples of malpractice and questionable practices occur on this side of the Atlantic.

“If it takes an angry Hulk to wake Brussels up, so be it,” Sandahl said. “Industry should not be allowed to sell substances before they are proven safe, but it does… Our children should not be born contaminated with toxic substances, but they are. The EU needs to get a grip on a reckless chemical industry, fast.” 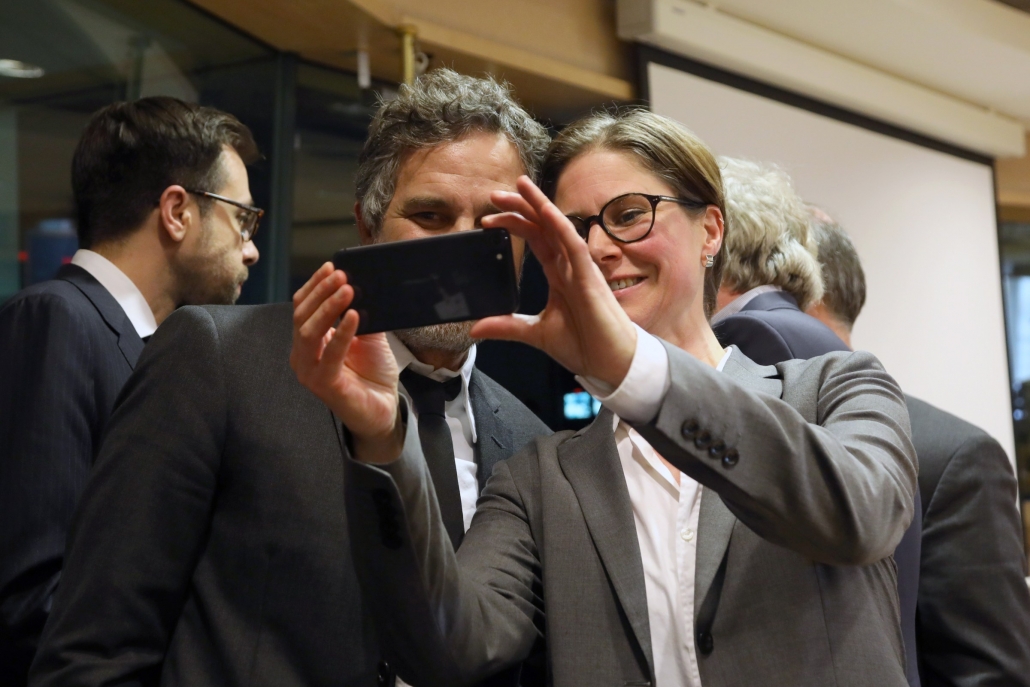 For instance, the EU’s ground-breaking Registration, Evaluation, Authorisation and Restriction of Chemicals (REACH) regulation is the strictest in the world and the most complex legislation passed in the Union’s history.

However, enforcement and monitoring has been slow and weak, with widespread and systematic breaches of REACH by manufacturers. This is reflected in the fact that REACH intended to eliminate some 1,400 toxic substances. To date, only 43 have actually been set for phase out.

This is partly due to the complexity of regulating tens of thousands of substances, many of whose effects, especially in combination, are poorly understood or contested.  In addition, chemicals companies control powerful and effective lobbies. This includes the European Risk Forum – which is backed by chemicals, fossil fuels and tobacco firms – that pushed through the so-called ‘Innovation Principle’ into EU policy, which is now being used by industry to try to blunt  environmental and safety regulations, including REACH.

Moreover, as Dark Waters demonstrates, the chemicals industry has deep pockets for long and costly legal battles, and can also, like other large corporations, undermine the rule of law through the murky Investor-State Dispute Settlement (ISDS) mechanism.

This failure has very real human and economic costs. The price tag Europe’s healthcare system is forced to carry for PFASs alone is estimated as up to €84 billion annually – which is a clear violation of the ‘polluter pays’ principle enshrined in EU law. Zooming out, the health consequences of exposure to toxic chemicals costs the world a tenth of global GDP, according to one major study.

“We’ve been poisoned without our knowledge, we had no choice,” Ruffalo said at the European Parliament, referring to the Dupont case. “They’ve made billions upon billions and, for some reason, they believe they shouldn’t have to clean this up.”

The explosion in the development of synthetic chemicals in recent decades means that pretty much every human on the planet is carrying (potentially) toxic chemicals in their bodies and bloodstreams. This has sparked considerable concern around the world, leading the UN to appoint, in 2014, Baskut Tuncak as “special rapporteur on toxics”.

Tuncak calls the proliferation of toxic substances in our environment a “silent pandemic”. “In many communities [pandemics are] increasing at rates that can only be explained by childhood exposure to toxics and otherwise hazardous substances, from pollution, contamination and consumer products,” he explained in an interview. “The silence of the pandemic largely refers to the fact that this is something that’s invisible. It’s invisible in terms of the cause and effect… The harm, the culprit, the perpetrator is also invisible.”

And at stake is not just the effects of individual chemicals or groups of chemicals in isolation, but how the plethora of chemicals to which we are exposed interact with one another in unforeseen and oft untested ways. “We are exposed to a toxic cocktail of substances which can interact with each other producing adverse health impacts their regulators didn’t foresee and didn’t predict,” Tuncak elaborated.

Beyond the impact to public and individual health, toxic pollution is fuelling human rights abuses and environmental conflicts around the world, with victims in poorer countries enjoying fewer protections and fewer recourses to compensation than in wealthy countries. Many of the over 3,000 cases featured in the ground-breaking Environmental Justice Atlas relate to toxic pollution, not just directly related to chemical products, but also to industrial waste, oil and gas drilling, fracking, mining, and more.

Although resistance to these abuses, both local and global, is mounting, human rights violations are also skyrocketing. An average of three to four people protecting the planet are killed each week, double what it was at the turn of the century, with many cases going unreported.

Many more women and men are attacked, harassed or silenced. A growing trend is the exploitation of the law courts to intimidate environmental and human rights defenders. A recent example is the case of Steven Donziger, the American human rights lawyer who won a multi-billion euro verdict in an Ecuadorian court on behalf of indigenous communities harmed by contamination caused by the activities of Texaco, which was acquired by Chevron.

Despite this landmark victory, unlike Dupont, Chevron has not paid out the awarded damages, reflecting the global inequality between victims of environmental crimes. It has also failed to clean up the mess Texaco left behind. To add injury to insult, Donziger has experienced the full force of the oil giant’s legal army.

“We will fight this until hell freezes over, and then fight it out on the ice,” a company spokesperson said at the time the litigation was first brought, and Chevron has stayed true to its word.

Over a period of a quarter of a century, there was hell to pay, not for Chevron but for its victims and their representatives. The oil giant moved the case through numerous jurisdictions, including the United States, Ecuador, the Netherlands and Canada.

The latest twist in the tale occurred in August 2019, when Donziger was put under house arrest, in a highly unusual court case the integrity of which has been questioned by legal scholars. “I’m like a corporate political prisoner,” Donziger said in an interview last month. “They are trying to totally destroy me.”

And it is not just this courageous human rights lawyer who is paying a heavy price for apparent corporate impunity, the Amazon communities he represented are still enduring the consequences of the pollution and devastation inflicted on their lands.